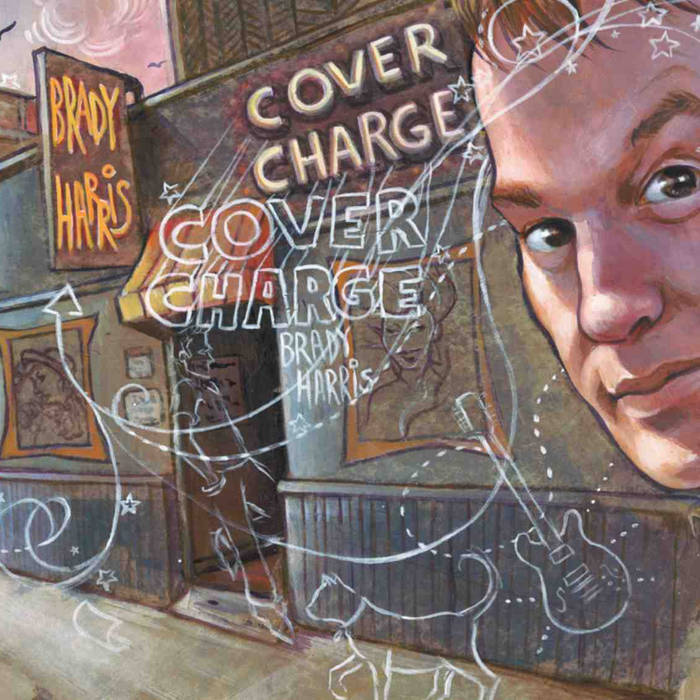 An "all-covers" record including Brady's take on Madonna, Cheap Trick, The Beatles, Oasis, The Vines, Duran Duran, The Killers, The Clash & Motorhead.

"Brady has delivered one of the finest, most unique collections of cover songs we've ever heard!" --KoolKat Musik (www.koolkatmusik.com)

Full Review:
There’s two lines of thought on a cover album. One says you play it straight; that the greatest feat is to really play like the band being covered. The other goes the exact opposite way. Re-interpret the song in as radical a style as you can. Run it through your own musical blender, pour out the contents across your stylings, and see how it tastes. Personally, I prefer, the later. There’s nothing as much fun as hearing a song you know and love, totally re-imagined in bold and startling ways. That’s what Brady Harris does.

A low-key, rootsy singer/songwriter from Texas, on Cover Charge Brady takes some of the most unexpected songs you can imagine a cowboy songsmith to be singing and turns them into startlingly new pieces of music. Versions no person could resist.

So what am I talking about? How about a warm and languid version of Madonna’s “Like a Virgin,” sung perfectly straight without any Weird Al irrelevance. It’s a fantastic, absolutely addictive version. As is his slide-guitar, lazy version of Duran Duran’s “Rio.” Under Brady’s vision, The Clash’s “Spanish Bombs,” takes on a full, over-the-hills country charm, But nothing can ever be as just flat out perfect as his low-toned, deep acoustic and slide guitar version of Motorhead’s “Ace of Spades.” I played this one for Pope and he was stunned by the brilliance in this interpretation of the track. The true strength of Lemmy's song writing becomes oh, so apparent. Truly, a cover masterpiece.
-Ripple Effect (ripplemusic.blogspot.com)

Brady has delivered one of the finest, most unique collections of cover songs we've ever heard! Taking a decidedly mellow delivery approach, he makes them his own in his original and unique remake/remodel process! Solid from start to finish, beginning with a Peter Case-like treatment of Madonna's "Like A Virgin", followed by a gorgeous, piano/guitar accompanied, harmony-filled take on the Beatles' "Girl", a pedal steel-laced take on Duran Duran's "Rio" that seamlessly segues into The Killers' "Smile Like You Mean It"! Also offered are wonderful renderings of the Clash's "Spanish Bombs" (again featuring some tasteful pedal steel accents), a bar room piano- led, John Lennon-like rendition of The Vines' "Highly Evolved" that could've been on Lennon's first solo record, Cheap Trick's "I Want You To Want Me" (imagine John Lennon covering it + again pedal steel crops up) that sublimely sneaks in the chorus from "Surrender" before evolving into Culture Club's "Do You Really Want To Hurt Me "! If that ain't enough, he also covers Oasis' "Underneath The Sky" (quite gorgeously we might add) and delivers an acoustic take (with that darned pedal steel again) on Motorhead's "Ace Of Spades" that you don't recognize until he gets to the chorus!
-KoolKat Musik (www.koolkatmusik.com)

Well Known Songs Get A Much Needed Makeover

Cover records that take obscure songs and bring them to a new audience are easy enough to assess; one like this one that takes on popular songs that are the wallpaper of the everyday are harder because it is difficult to distance yourself from the original and judge the cover and not just the song or how it has sounded on the 3,000 other occasions when you’ve heard it without wanting to and perhaps without really listening. What Harris has managed to do is not to shake the songs up too much; instead he dresses them in a new suit of clothes and makes them as respectable as they can be.

Taking on the Beatles (and by implication – Oasis) is an easy task for him; his own work is informed by them and with ‘Girl’ he holds the song respectfully and guides it in a swooning waltz. His vocals are spot on and the flecks of banjitar help him lay claim to the song. Many of the other versions build on this same template, converting into the Harris house style; thus he makes the Vines ‘Highly Evolved’ into a gently barrelling piano lament.

Stripping back even more layers for ‘Like a Virgin’ with just guitar bass and drums he sensibly resists any attempt at celebration and takes a modulated tender approach. Who knew that ‘Rio’ just needed some pedal steel, though here the lyrics defeat his attempt to take the song seriously. He’s on much firmer ground with ‘Smile Like You Mean It’ where the pedal steel sounds like it always should have been there.

Strangely ‘Ace of Spades’ sounds like it was made for mandolin, ukulele and pedal steel; his treatment claims the song, though gambling has always been a staple of country music. The version of ‘Spanish Bombs’ is excellent and the medley of ‘I Want You to Want Me / Surrender / Do You Really Want to Hurt Me’ is a seamless acoustic mash-up.

The strength and weakness of these versions is that Harris has selected a diverse range of songs and subjects them all to pretty much the same treatment, which works in binding the songs together coherently but results in a kind of sameness throughout. I’d like to have seen him take a few more risks.
-David Cowling, Americana-UK

11. Brady Harris - COVER CHARGE. I am a total sucker for cover albums. Hearing a new artist (well, an artist that’s new to me at least) doing an unique cover of a popular song, to hear how they take that tune on, is always an inviting proposition and here, Harris does hauntingly jaunty version of “Like a Virgin”, “Smile Like You Mean It” and a stellar mash-up of “I Want You to Want Me” and “Do You Really Want to Hurt Me”. Oh, and let’s not forget that take on “Ace of Spaces”.
notlameblog.blogspot.com

* * * * * * *
Brady Harris - Highly Evolved [originally by The Vines]
I had never heard of Brady Harris, but he's definitely due for some recognition after listening to his 2007 cover album Cover Charge, which features covers of The Killers, Madonna, Duran Duran, Oasis, and more. Do you think we'll ever run out of cover puns to title these sorts of albums? Anyway, it was a delight to find a cover of The Vines' Highly Evolved, particularly in this interpretation that sounds like he's playing on a beat-up piano in the corner of a smoky saloon. A folksy cover of Motörhead's Ace of Spades is also well-worth a listen. Cover Charge can be had for under $10 at CD Baby (samples available).
-FONG SONGS BLOG (tinyurl.com/2atsqsd)

* * * * * * *
More evidence that it's what's lurking beneath the radar that's really important, Brady Harris - following the familiar career trajectory of starving busker (in London and Paris), accidental recordings, critical acclaim (not the least of which came at the NxNW conference in '99) impressive underground success ($5000 from MP3.com) and still no major label deal - has just released his third album, recorded at home with the assistance of a $500 Shure microphone he won for his roots-grass version of Motorhead's 'Ace Of Spades'. Intrigued? Good, for mere words can never do him justice. Ignore, then, the fact that Harris' voice bears comparisons with John Lennon; ignore the fact that he creates a beguiling brand of alt. power country pop, something like Peter Bruntnell massaging Big Star; ignore the fact that Harris can take on Joe Pernice in his own back yard and win. Ignore these words, let your ears do the judging, and you're left wondering where this California-dwelling Texan has been hiding all your life.