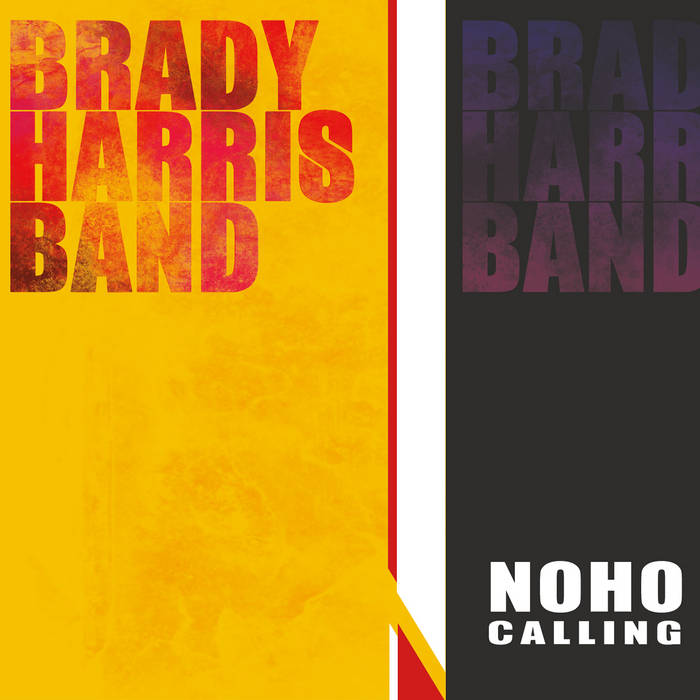 A short day's journey into a long NoHo night, NoHo Calling is the follow up to the Brady Harris Band's debut, NoHo Confidential. Recorded by John Adair at his Nodondo Studios, NoHo Calling features 10 new original songs and 2 covers, Our Lips Are Sealed (The Go-Go's) & I've Seen That Face Before/Libertango (Grace Jones).

Check out the new interview at the excellent The Daily Country site about NoHo Calling and related musical endeavors:
thedailycountry.com/interviewsessential-8/essential-8-brady-harris-band

AMERICANA-UK:
(8/10 Stars)
Opening with the Devoesque ‘Let’s Live’ which is all new wave rhythms and hand claps with catchy choruses, you think you have a handle on The Brady Harris band and their new platter ‘NOHO Calling’ (that’s North Hollywood to you and me!) But the next track ‘Raise a Glass’ is pure barrelhouse boozer blues of the soft country lament variety, all crisp shuffle snare and sweet guitar and piano solos . It could be 1am and the bourbon has run out without it being messy.

‘Better Late Than Never’ switches again – a somewhat restrained driving song highlighting some tasty instrumental breaks. With ‘Our Lips Are Sealed’ we perhaps return to a template that is probably close to understanding the Brady Harris mindset a brilliant cover that retains the underlying menace of the song whilst pouring it through the filter of bluesy tight guitars and a great lead break where the band are clearly enjoying themselves.

‘The Noho Sound’ changes everything! Full of local acronyms and places in the lyrics, the music is a soft harmony driven doo-wop sitting on a crystal clear jazz guitar. Beautiful and definitely subversive.

And so it goes, this album unfolds further with each listen and it is a journey I highly recommend. There is a whole but each of the parts however short and succinct is different and equally attention-grabbing, right up to the brooding instrumental closer of ‘Battle of Swankershim’. Recommended.

The impressive “Better Late Than Never” is a catchy standout with a Beatlesque approach. And a slowed down cover of The Go-Go’s “Our Lips Are Sealed” is an interesting addition. The Beach Boys-styled backing harmonies on “The Noho Sound” lends some sophistication to this simple acoustic song. I really enjoyed his NSFW song “Old Drunk Motherfuckers” about the worst people you meet in a bar, and his slide guitar ballad “Drain Me” has a nice Lennon-like weariness to it that makes it another standout. Brady’s music is ready-made for late nights over a bottle, so open a cold one and enjoy the cool refreshing taste of NoHo Calling.
www.powerpopaholic.com

BIO:
Hailing from North Hollywood, CA, the Brady Harris Band is a Rootsy-Beatlesque quartet big on harmonies, chord changes and the occasional female cover version (Go-Gos, Blondie, Grace Jones).  “Stellar…Imagine if the Beatles were from Texas” is how Keith Creighton of Popdose describes their sound.  Having played gigs up and down the Central and Southern California coast since releasing their critically acclaimed debut EP, NoHo Confidential (“A wonderful, best-of-the-year worthy EP…this will be in your Top 10 for sure.” –Allen Haber, PurePopRadio),  the BHB are back with the full length follow-up, NoHo Calling. And ready rock the NoHo Sound anew.

Formed through LA musico connections, kindred bands and North Hollywood bars, the BHB first played a one-off gig to support Brady at a dingy bar on the industrial stretch of Burbank Blvd.  Then the rehearsals continued and the setlist grew as did the gigs.  John Adair handles lead guitar, harmony vocals and is the BHB’s in-house producer and multi-instrumentalist.  It’s true, he has performed with George Thorogood, Slash, Vince Neil, and many others.  Tall, dark and handsome and a devotee of cold showers. Band nickname: Dreamboat.  Marc Bernal holds down the bottom end and also sings harmony.  A Spaniard and die-hard FC Barcelona & Harry Potter fan, he can be frequently found at LA’s historic Wiltern Theater, working the stage and sound.  Band nickname: Marcness.  Steve Markowitz keeps the time on the kit and also sings harmony.  He gets mistaken for Sandra Bullock's ex, and occasionally James Hetfield from Metallica.  Fun fact: Steve’s dad sang the Scooby Doo theme.  Band nickname: MacWizz.  Brady sings, plays guitar and other stringed things.  A former busker (London & Paris) Brady is a devotee of Mexican lagers and loves it when people play themselves in re-enactments on TV detective shows.  He can be found watching Unsolved Mysteries re-runs from the early '90s on a TV from the early '90s in his Hollywood hovel. Band nickname: Brisket.

Hang with us as we roll out our new album and much more.  Sign up on the email list below and stay in touch.  Download NoHo Calling and it’s predecessor NoHo Confidential which AbsolutePowerPop called “Another slice of unique Beatlesque-Americana. No need to keep this one confidential”.

Thanks and cheers til we see ya.